If you buy this smartphone from Karbonn with e-Wallet Mobikwik, you will get 30 percent cash back

New Delhi: Indian company Karbonn Mobiles has launched its new titanium series smartphone. The smartphone, priced at Rs 6,999, was launched by Karbonn Titanium Frames S7. The company has partnered with Shopchople and Airtel for this smartphone. This phone, which comes with Rear Metallic Panel, is available in Black, Champagne, and Red Color Varieties.This phone will get an instant discount of 10% on IndusInd Bank and Standard Chartered Bank with a credit or debit card. At the same time, if you buy the Karbonn Titanium Frames S7 with e-Wallet Mobikwik, you will get 30 percent cash back.

There is also a launch offer of Airtel with this smartphone of carbon, under which cashback of Rs. 2,000 is being given. In order to take advantage of this offer, customers will have to recharge Rs 199 for 36 months. Under the offer, customers will be given 500 rupees after 18 months and 15 months later, the remaining 1,500 will be given as cash back.The Karbonn Titanium Frames S7 has a 5.5-inch full HD IPS display, which has a resolution of 1080 x 1920 pixels. The phone has a 1.45 GHz quad-core processor with 3GB of RAM. The internal memory of the phone is 32GB which can be extended up to 128GB via microSD card if needed.

This smartphone has a 13-megapixel rear camera equipped with LED flash. The phone’s front camera also has an LED flash and it is also 13MP. There is also a fingerprint sensor in this smartphone that supports Dual SIM. Speaking of connectivity features, the Karbonn titanium frames S7 includes Micro-USB with 4G VoLTE, Wi-Fi, Bluetooth, GPS, and OTG. The Android 7.0 Nouga has a 3,000mAh battery that runs on this smartphone. The dimensions of the phone are 154.3 x76.6×8.2mm.

Shashin Devasare, executive director of Karbonn Mobiles, said in a statement that our latest offering is targeted to youth who want a smartphone that is not only high performance but also a solution to their daily needs.

This mobile phone is available in e-commerce platform shop. This is based on the Android 7.0 Nouga operating system. It has a quad-core processor of 1.45 GHz, with three GB RAM and 32 GB internal storage, which can be extended up to 128 GB. 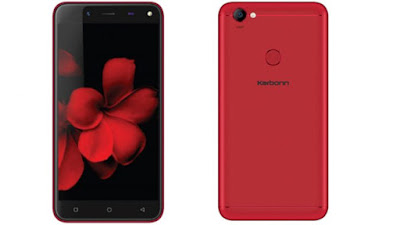 The company said that this smartphone comes with Artificial Intelligence (AI) based personal assistant, whose name is Nikki dot AI, which provides users various payment, recharge, movie tickets, health and home service through their channel partner. Offers. This device has a 5.5-inch HD display, with 2.5 d of the curved glass. This phone has a battery of 3,000 mAh, about which the company claims that it operates all day while charging.